One of the shorter cups of coffee in baseball history belongs to Link Wasem, a catcher with the 1937 Boston Bees.  Wasem appeared in two games – the first was a home game in which the Bees lost 13 – 1 and he gave starting catcher Al Lopez a break for two innings before being lifted for a pinch hitter (what – they didn’t let him bat?).  Not quite three weeks later, Wasem relieved Lopez during an 11 – 1 loss to the Cubs in Chicago, but was allowed his lone major league plate appearance after giving Lopez the last two innings off in that game, too.

Lincoln William Wasem was born on 30 January 1911 in Birmingham, Ohio to William and Amelia (Latteman) Wasem. (A military form suggests his real birthplace was Henrietta, OH in Lorain county.) William was a machinist, Amelia had her hands full with a large family. Link was the third of eight kids – six of them boys – who all played various sports. In high school, Link wrestled, and played baseball and basketball with his brother, Don – they were both forwards on various teams in the area. In 1932, the two played in the Northeastern Ohio District basketball tournament. Don was also a fine pitcher – he pitched for Ohio State University. Link was a catcher and the two would dominate local semi-pro teams. In later years, the Birmingham Fire nine featured five members of the Wasem family and played exhibition and semi-professional games in the Sandusky, Ohio area. 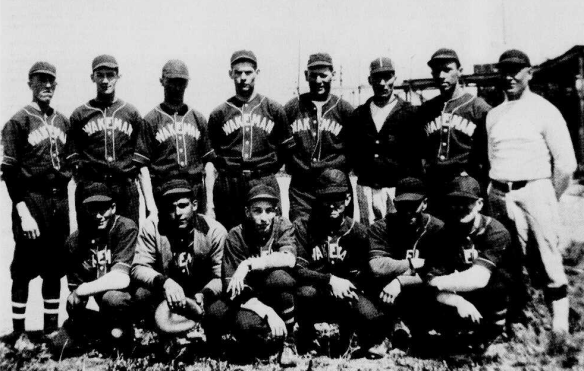 The Norfolk (OH) Reflector included this photo of the Wakeman Red Caps from what was thought to be the 1936 season.  Don and Link Wasem are the first two players (from the left) in the front row.

At first, Wasem rode the pine as a veteran catcher, Don Benn, saw most of the action. At times, he’d back up other players – being mobile, he would play the outfield and even shortstop if needed. Financial problems led to Benn’s release and Wasem saw action in 86 games and batted .292. Called “the best improved player in the league,” Wasem was named the second string All-Star catcher in the Western League. Scout Jack Dempsey said that “…within three years Link Wasem, Miner catcher, will be in the major leagues.” At the end of the season, he was purchased by Buffalo and in due time was being schooled in the finer points of catching by Ray Schalk.

Buffalo optioned Wasem to Wilkes-Barre when a Bisons player was injured and replaced by Wilkes-Barre Barons star Johnny Stats. Within weeks, Wasem made fans by being willing to play the outfield, and by rapping a pair of homers in a loss to the Hazleton Moutaineers. Toward the end of the season, Wasem was recalled to catch for Buffalo.

After a season as a backup catcher for the Bisons, Wasem returned to Wilkes-Barre for 1936 and was a slugging sensation as both a catcher and left fielder for the Barons. That year, he batted .322 with 12 homers – many of them game breakers and one of them off a centerfield sign in Hazelton’s Artillery Field that earned him a suit and a slew of breakfasts. His fine 1936 season got the attention of major league scouts and he signed with the Boston Bees.

Wasem stayed with the Bees following spring training in 1937 and played catcher in the intercity series between the Bees and Red Sox. In May, he saw action in two games, getting four innings behind the plate and one at bat – he made the last out in an 11 – 1 loss to the Cubs in Wrigley field by flying out to centerfielder Joe Marty (Charlie Root got the complete game win). Before long, he was dispatched to Scranton in the NY-PENN league. Immediately, Scranton started playing well with Wasem in the lineup. “He keeps his head in the game,” wrote Joe Policoff of the Scranton Republican,” and he knows what the game is about.”

In late July, Wasem was involved in a collision at the plate when Big Alex Mustaikis, a pitcher for the Hazleton Red Sox, slid into Wasem in an attempt to score. He was injured, but only briefly – Mustaikis was out much longer with a knee injury. Wasem completed a fine season and even received Most Valuable Player votes from league scribes.

In 1938, Wasem found himself sold by the Bees to the Hollywood Stars in the Pacific Coast League. However, that winter Wasem had landed a steady job with decent pay in Germantown, PA. So, Wasem decided to hang up the mask and passed on the opportunity to play in California. He’d get there eventually – living in South Laguna Beach in his retirement years.

Wasem served two years during World War II, the second year in foreign service. He married Marguerite Eleanor Rickers on 24 August 1935. She was a Physical and Occupational Therapist in hospitals throughout Pennsylvania, and they had one daughter, Joyce. He passed to the next league on 6 March 1979 in South Laguna, CA. His wife, Eleanor – also born in 1911 – missed by a few months of seeing her 100th birthday.