In this Indianapolis staged photo, Schemanske is flanked by Sumpter Clarke and Mully DeLoof.

Fred Schemanske, a big right-handed pitcher, actually made his debut as a pinch hitter – drawing a walk with the bases loaded in what was part of a seven run, ninth inning rally that allowed the Washington Senators to steal a game from the team of his hometown, the Detroit Tigers, 9 – 8.

Frederick George Schemanske was the son of Gotfried and Augusta (Dorsch) Schemanske, born on 28 April 1903, and one of seven children. Gotfried repaired railroad cars, having arrived from Germany in the 1880s; his wife would arrive shortly after. Fred was born in the Woodmere,  Michigan – a rural area eventually swallowed up by Detroit.  After finishing his second year of high school, the husky Schemanske took up playing baseball on the sandlots of the area.  It was there another Michigan ballplayer, Clarke (Pinky) Pittenger – then playing for the Red Sox – who recommended that a team in Hamilton, Ontario give the young right-handed pitcher a shot for the 1922 season.

“Fred was anything but a tame little duck and between wild pitches that manager Bill Kelly snared only after stopping the game and securing a motorcycle, the side was retired without further damage.”

Schemanske didn’t stick in Hamilton, but took up a job pitching for Port Huron, Michigan instead.  A year later, he received a tryout with the Detroit Tigers.

“Cobb is unusually sweet on Fred Schemanske, a Polish youth from Detroit, who promises to become another Covaleskie. In his game against Augusta last week, Schemanske allowed but one hit in four innings and won the favor of the Georgia Peach.”

Schemanske didn’t land with the Tigers for 1923 despite having a few good outings (and not being Polish).  Cobb released him and Schemanske found his way to Evansville where he apparently pitched well enough to earn a second shot at major league action.  The Senators used him as a pinch hitter once, and then – in the last game of the season – he pitched the final inning of a loss to the Philadelphia Athletics.  He allowed three hits and three runs.  The Senators didn’t keep him around for 1924. 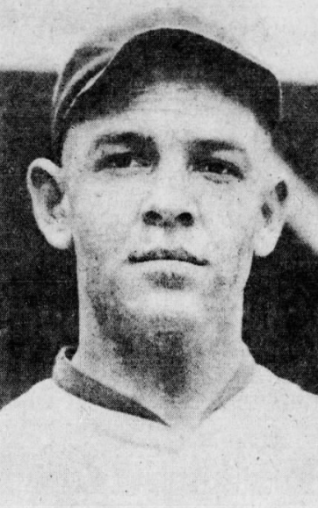 Instead, Schemanske pitched for Omaha in 1924 and then Indianapolis for 1925.  Schemanske would alternate between starting and relieving games for both teams, but never made an enviable record as a pitcher.  Despite that, Schemanske – now called Buck – was a holdout.  He settled and joined Indianapolis for spring training but came down with a stomach ailment that eventually required surgery and he missed out on the entire 1926 season.  He made a comeback in 1927 with Indianapolis, but it wasn’t good enough to stay in the high minors, so he was sent to Quincy, which was a farm team of the Indians.

“The hero of this contest, who should go down in Quincy’s hall of fame, was Fred Schemanske, big newcomer from Indianapolis who turned the Commies back without a run until two were down in the ninth. Schemanske was invincible with men on bases, 12 Commodores being left on the sacks, while he helped win his own game with a double that scored three runs in the second inning.”

He didn’t have enough heroic games – Schemanske was sold to Beaumont in the Texas League for the 1929 season, but left the team after spring training and returned home to Detroit.  He took a position as a press operator – and spent his nights and weekends in the 1930s becoming a competent bowler.  In fact, Schemanske rolled a record 738 series for the Cadillac House League (279, 244, 215) in 1932, breaking the old league record by 13 pins.  He appears infrequently in the papers as a tournament bowler for much of the 1930s.

In 1939, he married Beatrice Menard, a Detroit area clerk – it was her second marriage. Their marriage lasted the rest of his life, but included no children.  As with his first breath, he took his final breath in Detroit on 18 February 1960.  His obituary notes that his passing occurred “suddenly.”