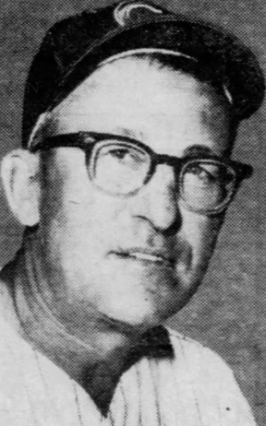 Avitus “Vedie” Himsl was the first Chicago Cubs manager in 1961 when the Cubs tried using a rotation of different coaches as the manager.  And, Himsl is the only manager in major league history born in the state of Montana.

Avitus Bernard Himsl was born to Austrian immigrants Victor and Clara (Engels) Himsl on 02 April 1917 in the tiny town of Plevna, Montana – maybe a few rounds of long toss from the North Dakota border.  The Himsl family moved to Plevna in 1913 after living in Saskatchewan.  Victor owned the Plevna State Bank until it was closed during the Great Depression.  However, Avitus’s brother, Mathias, took over the bank’s assets, including a 320 acre plot of land, and used mineral royalties to pay off all depositors and creditors with interest – though it took nearly 40 years to complete the payments. In fact, the Plevna State Bank was the only bank in the United States closed during the depression that paid everybody back.

Avitus was one of seven children and he told Dick Young of the New York Daily News that his mother picked his name out of a book on the lives of saints. Tall and clean cut with horn-rimmed glasses, Young wrote, “His deep voice drones on, like a college prof delivering a lecture.” Avitus learned to play baseball in the fields of his youth. “We had what we called ‘cow pasture’ baseball with some of the people in town,” Himsl explained. “Some of the older guys thought they could still play. We had a pretty good club and would as far as Miles City to play.”  After playing all sports at Plevna High School, Himsl went to St John’s University in Collegeville, MN where he played football, basketball and baseball.  He played semi-professional ball during his summers in Minnesota.

Scouts found him – and after his junior year he signed a contract with the Detroit Tigers and started playing with them after graduating in 1938. He was first assigned to Beaumont, TX and then Class D Alexandria. “My contract was handled under the table with Detroit,” remembered Himsl. “They had a lot of players in their system that year, and when they didn’t pay me some of the money I thought I was going to get, I wrote the commissioner.”

Kenesaw Mountain Landis met with Himsl and other players and decided that the Tigers (and later St. Louis) had too many players under their control and Himsl was among the first players that Landis declared were now free agents.  Vedie signed with St. Paul in the American Association and played there for four years before serving in World War II.

He tried a comeback for a year with the Dodger organization, but his lack of playing ball during the war sapped him of his ability to get batters out. After the 1946 season, he was done as a player. At that point, he became a scout and instructor, a business manager, and ran camps for the St. Louis Cardinals before joining the Cubs organization as a scout and minor league pitching instructor in 1952.

Vedie’s lone time in the major leagues was when he was named a member of the “College of Coaches”, an experiment in management by Cubs owner Philip K. Wrigley. After the last spring training exhibition game against Boston, the team was flying to Houston when Wrigley called the general manager, John Holland, and told him who he wanted as the first manager in the rotation.

“It was the furthest thing from my mind, that I would be singled out,” Himsl told Jerome Holtzman. “I wasn’t expecting anything like that.” In fact, another Chicago paper called Himsl a 100-1 longshot to be the first manager. Himsl, then a pitching coach, knew that Wrigley had watched him manage a spring training game where every decision he made seemed to work and guessed that it made a strong impression on Wrigley.

Himsl managed the first eleven games, winning five, and then was replaced – as scheduled – by Harry Craft. Himsl left and took over the reins of the AAA team in Salt Lake City instead. However, after Craft’s two weeks were up, Himsl was given the top job again. That time, Himsl lost 13 of 18 decisions.  If he were alive, Holtzman would tell you that, while the encyclopedia says he got a third shot and lost three more games, Himsl spent the rest of the year as the minor league pitching instructor.  His 32 games as a manager (there was a tie in there) is among the shortest first terms as a manager in baseball history.

At the time, Himsl took the carousel in stride. “We’re all human,” Himsl told Dick Young. “There is a certain amount of personal thrill in calling the shots. But this is a team effort. None of us is fighting for the job. We know everybody will have an opportunity. None of us is making an issue of it, as the fans and writers seem to be.” Himsl admitted, though, that the players were likely the most affected because each manager liked different types of players and players didn’t know where they stood as managers changed.

While the College of Coaches is generally mocked – and was mocked considerably at the time – Himsl didn’t think it was necessarily a bad idea. “From a won-loss standpoint, it didn’t work… When you look back, the club didn’t do any better the years before the experiment and in the years after that.”

Himsl remained with the Cubs as a scout or instructor through the 1985 season, then retired and did some scouting in a limited capacity for the Cubs. “Vedie’s a terrific scout, one of the best in the country,” Whitey Lockman explained – Lockman was with the Marlins when that franchise was formed and Lockman tried to hire Vedie away from the Cubs. However, Vedie chose to stay with Chicago.

Himsl married Kathryn (Bloom) and had two sons. He lived the rest of his days in Chicago, passing away to the next league on 15 March 2004.