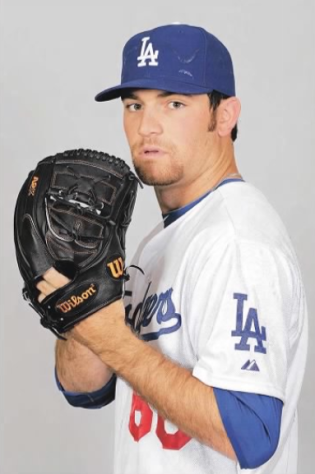 Chris Withrow was a first round pick of the Dodgers in 2007 out of Midland Christian High School.  A hard throwing right hander (upper 90s fastball with a hard slider), Withrow shifted from a starting role to reliever after returning from a back injury in 2012. “It’s a different mentality,” he told Adam Zuvanich of the Odessa American. “You go in and you may have one or two innings, and you go in and have your best stuff for that inning or two. There’s a little more adrenaline pumping when you get the phone call that you’re going in…”

Withrow was called up after 25 relief appearances at AAA Albuquerque where he had a 1.71 ERA in 2013 and earned a save in 26 appearances for the Dodgers. He opened the 2014 season with the Dodgers but was a little wild, so he returned to Albuquerque. Shortly after landing in New Mexico, however, he tore a ligament in his right elbow, requiring Tommy John surgery in 2014 – which meant he didn’t pitch at all the next season. In 2015, he was traded with Juan Uribe to Atlanta for Alberto Callaspo, Eric Stults, Ian Thomas, and Juan Jaime. His MLB career ended after the 2016 season with Atlanta, though he was signed by Kansas City and sent to a minor league camp in 2017 – only to get injured again. In his three major league seasons, he won six decisions without a loss and posted a 3.07 ERA in 92 relief appearances.