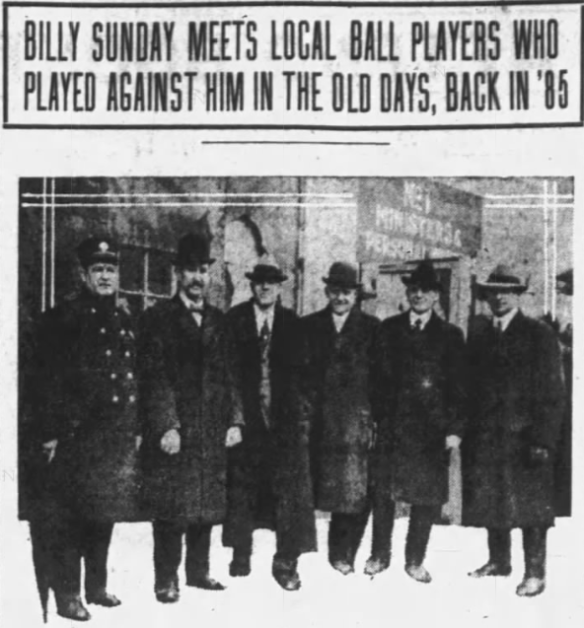 Photo found in the Buffalo Evening News on 24 March 1917 shows a bunch of old ballplayers hanging out with Billy Sunday (3rd from left).  To Billy’s left is Herm Doscher.

Association and NL Player and umpire. He’s the first father to have a son also play in the majors (Herm with Chicago in 1879, and his son, Jack, with the Cubs in 1903).  In 1892, Doscher scouted an outfielder named William O’Kelleher who was playing semi-pro baseball in Brooklyn and arranged for O’Kelleher to play professionally for the Birmingham Bingos.  O’Kelleher is much more famous as the name he took after becoming a professional: Wee Willie Keeler.

Sometimes Herm’s name is spelled Doescher in the newspapers…

Herman Doescher seems to have stopped up his end of the pipe line he had laid to secure the appointment of umpire in the Eastern League, for he has opened a saloon in Buffalo. There will be many regular attendants of the games on the circuit who will regret the passing of Herm Doescher, a man who has been steadily connected with the national game since 1875 as a player, manager, and umpire.

Pitcher, outfielder. Went 33 – 7 over two seasons as a pitcher for two Boston clubs (Association and NL), and was a good enough hitter to keep playing in the field once his pitching wing died.

Infielder with the Pirates – the only Pirate who defected to the American League when the AL formed, signing with the Orioles then moving to the Highlanders. He finished with the Browns before heading off to the American Association… 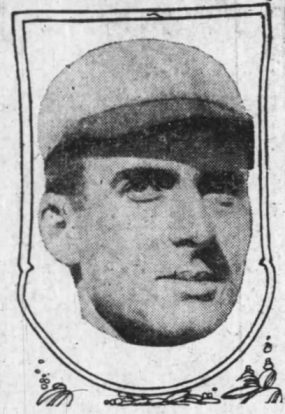 Oakland area pitcher who got a brief trial with the Red Sox, but was much more successful pitching in the early days of the Pacific Coast League.  At some point, earned his medical degree from Cal and would work as a doctor in the off-season.  After a long minor league career, he took his local fame and managed a west coast division of Spaulding Sporting Goods and lived the rest of his days in Oakland.

When he died in 1953, he left behind a son, William, and a daughter, Elizabeth (White).

Only the most important General Manager before Theo Epstein… Had a LONG career, successful with many teams. And he integrated baseball by signing Jackie Robinson.

Famed for his baserunning error (not completing his trip from first base to second base on a single by the batter, thus being called out on an inning ending force play) which was infrequently called (though there were other examples of this before him) but upheld in a key game late in the 1908 season.  He had a pretty long and successful career, even joining the Cubs at one point.

The best National League catcher until Campanella, and maybe until Bench.

Couldn’t get regular work with the Red Sox, so was moved to the Brewers.  Became a devastating hitting first baseman with the Brew Crew, hitting .352 in 1980 and being the middle of the lineup force for a World Series winner.

More famous for his hair, but a fine hitter (usually a platoon guy) with very good power.  Helped the Yankees get over the top and was a member of the South Side Hit Men with the White Sox.

Do you know how many guys named John Fitzgerald in New England there are/were?  This one was 26 at the time.  I can’t find (yet) a death certificate, so what is your guess?  Typhoid?  Tuberculosis?

“Big Bill” had lung trouble the last two years of his life and tried living in Southern California, Arizona, and even Hawaii – but, as his death article notes, it was in vain.  Tuberculosis, sounds like, took him at 33. – “His Last Inning,” Pacific Bee (Sacramento), December 22, 1897: 3.

American Association outfielder with Cincinnati and the Alleghenies in 1884, but only briefly.  He was REALLY fast, but you got to hit more than .150 to stay in the league.

Famous for being among the first to catch a ball dropped from an airplane…  Was a Giant outfielder, then St. Louis, and spent time in the PCL.  Spent most of his post baseball life in Buffalo working recreation management jobs, but was once the Assistant Secretary of State for New York…  Ill for four months before he passed at 64.  – “Ex-Major Leaguer Elmer Zacher, Dies,” Elmira Star-Gazette, December 21, 1944: 24.

On his birthday, no less.

I remember his baseball card with the Cubs – might have been a 1973 card.  Did you know he had three consecutive pinch hits for the Athletics in the World Series once?  Marquez died in an automobile accident in Venezuela at just 38. – “Ex-Athletic Marquez dies in crash,” Santa Rosa Press-Democrat, December 22, 1984: 1D.

Driving home after a winter ball game in Puerto Rico, DeSa was in a head-on collision; both drivers died.  – “DeSa Killed in Puerto Rico Car Crash,” Honolulu Star-Bulletin, December 20, 1986: B-1.

YOU SHOULD HAVE BEEN THERE!!!

1940 Connie Mack buys out the heirs of Benjamin Shibe and now is the sole owner of the Philadelphia Athletics.

2001 John Henry buys the Red Sox from the Yawkey Trust for more than $600 million.

1903 Boston sends Tom Hughes to the Highlanders for Jesse Tannehill. Boston wouldn’t win another World Series for another nine years, until Tris Speaker vanquished the Curse of Long Tom.

Boston was still short of cash, though, so it sent Bullet Joe Bush, Sad Sam Jones, and Everett Scott to the Yankees for four players and $100,000.