Dario Lodigiani was a good second and third baseman whose big league career was shortened by World War II, but extended for years beyond his playing days by his ability to find and hone young talent. 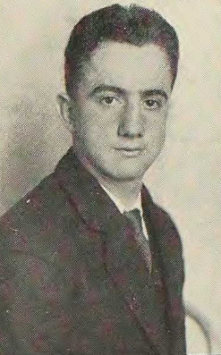 Born 6 June 1916 to Carlo and Antoinetta Arrigotti Lodigiani, Dario was the second of five boys – but the first of at least two professional ballplayers (brother Eddie played for Topeka in 1940).  Carlo, a baker, and Antoinetta both immigrated to the United States in 1913, settling in the North Beach section of San Francisco – near a lot of other Italian immigrants.  Dario was small and thick, but quick, agile and smart – at Galileo High School, he played soccer, football, basketball, and baseball while also serving on the principal’s cabinet.  And, he was close friends with Dominic DiMaggio, who (like his older brothers) played baseball at Galileo High School and hung out with Dario at Funston Playground, which had a fine baseball stadium at the marina.

After graduating from high school, Lodigiani played for the Langendorf Royals and in the Golden Valley League as a semi-professional second baseman.   His toughness (and hair) earned him the nickname “Dempsey” as a young ballplayer.  While playing American Legion ball for Legion Post 363 he was noticed by scout Spike Hennessey and signed to play for the Oakland Oaks of the PCL.

“Dario Lodigiani, who day by day is looking more like a big league prospect, featured the seventh inning raid with a long double…”

After a summer crushing the ball at a .400 clip for Vancouver, Lodigiani, still a teen, was impressive in his 1935 Oaks debut, batting .395 with a homer in 38 at bats.  When the 1936 season started, Oakland manager Billy Meyer had to make a tough decision – go with veterans Bernie Deviveiros and Ernie Leishman in the middle of the infield, or give the jobs to University of Oregon shortstop Joe Gordon and teenaged Lodigiani at second base.  Meyer went with the kids.  Early on, Lodigiani was seen as the better prospect, though Gordon soon proved to be the better player and was purchased by the Yankees at the end of the 1936 season.  Over the 1936 and 1937 seasons, he played in more than 160 games and batted .280 and .327, anchored a solid infield and became one of the more popular players on the Oaks – him and his old friend Dominic DiMaggio.  In fact, Lodi earned himself a “day” where he was feted with gifts for his fine season.  In October, it was announced that the 21-year-old kid was soon leaving to join the Philadelphia A’s and Connie Mack.  It was a trade of sorts – Mack sent five players and cash back to Oakland to acquire Lodigiani, including Jess Hill, Wilbur Conroy, and infielder Hugh Lube.  It was a great deal for Oakland, who got nine solid seasons out of two of those players, plus another $15,000.

“Dario Lodigiani, Philadelphia third baseman, was hit on the head by one of Kimberlin’s pitches in the seventh inning. He fell to the ground apparently unconscious and, after being revived, was taken to a hospital.”

Lodigiani didn’t disappoint as a hitter, batting .280 in 93 games and getting on base more than 36% of the time for the 1938 Athletics, though he did Connie Mack a favor and spent a quick hitch in the Eastern League where he batted .303 down the stretch trying to help Williamsburg win the league title.  He did, however, struggle at second base and eventually moved to third base.  In May, 1939, “Lodi” was felled by a Harry Kimberlin pitch, suffering a concussion but, thankfully, no other more serious injuries.  The concussion, and certainly the incident, may have affected his play.  Lodigiani’s batting average for 1939 fell to .260 and a year later he played just one game for the Athletics but spent the rest of the season with Toronto of the International League.  Connie Mack traded Lodi to the White Sox for pitcher Jack Knott after the season ended.

“I remember Jimmy Dykes used to say (Lodigiani) played third base ‘as long as his chest held out.'” – Thornton Lee.

His first season with the White Sox didn’t really work out.  In June, he had a shot at ending Joe DiMaggio’s streak before it got past 25 games – but Dario couldn’t handle a hot smash down the line.  It ricocheted off Lodigiani’s chest and bounced to his left.  The throw didn’t get there in time.  The scorer ruled it a single and not an error – keeping the streak alive.  In July, 1941 he broke a finger and then struggled to a .239 average.

However,  Lodi picked it up to .280 in a utility role for 1942.  That summer, Lodigiani was one of fourteen players and coaches tossed from a game against the Red Sox.  After Joe Haynes tossed a couple of pitches up and in to Ted Williams, someone – Lodi claimed it was coach Mule Haas who had a uniquely loud raspberry that he would launch from the dugout – said something that bothered umpire Red Jones.  Not knowing who was responsible for the noise (at some point it was rumored to be a ventriloquist), Jones tossed everyone but the manager, a trainer, and the bat boy.  Coach Bing Miller offered his glasses to Jones on the way to the clubhouse.

After that season, Lodi enlisted and joined the Air Force for World War II.  Private Lodigiani spent much of the war years in a support role in Hawaii and was fortunate to be allowed to manage and play for the Hickam Bombers base team during much of the war (a teammate was Ferris Fain).  When he returned in 1946, he got one more season with the Sox but was lost to the team after he first broke his arm, and then had surgery to remove bone chips in his elbow that May, and again the following spring.

In May, after working out the kinks of his elbow and getting his batting swing grooved, Lodigiani was back in an Oakland Oaks uniform.  That year, he played for Casey Stengel and along side a third DiMaggio brother.  He had played in a youth league with Joe, he played high school and minor league ball with Dom, and now Dario was a teammate of Vince DiMaggio.  And, he could help mentor a young infielder named Billy Martin.  The 1948 Oakland Oaks were loaded with old and young talent.  Joining Lodigiani and the twenty-year-old Martin were Ernie Lombardi, Nick Etten (43-155-.313), and George Metkovitch (.336 with 23 homers).  Throw in a veteran staff, and the Oaks would win the Pacific Coast League crown by two games over San Francisco.  It was the first pennant for Oakland in twenty one years. 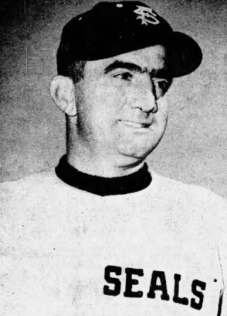 “We grieve at the announcement Dario Lodigiani is no longer to be with the Oaks. The way he hits, the way he starts double plays and the music in his name are things we should have kept.”

The 1949 Oakland team had a new manager in Charlie Dressen, and the defending champions played just .500 ball for the first two months of the season.  Dressen apparently didn’t have full support from some of the veterans – and as June began, a bunch of veteran players were suddenly placed on irrevocable waivers.  Dressen was quoted as saying “If I am going to lose, I’m going to lose my way.”  So, on the night the team celebrated raising the championship pennant, one player was sold and a few others were waived.  One of those players was the very popular Dario Lodigiani.  Lodigiani was considered a bonus player – he was signed for more than the $4000 signing limit in 1947 – and Oakland could get back a good chunk of that money by letting Lodi go.

While every team was interested in Lodi, three teams initially filed a claim.  The first was San Diego, then Hollywood, and finally Sacramento.  With the worst record of the three, Sacramento was ready to bring Lodigiani to their squad.  However, the night before the waiver claiming period expired, Sacramento won their game and San Francisco lost its game, putting Sacramento a half game ahead of the Seals in the standings.  Seals management hastily sent out a wire and filed a claim for Lodigiani minutes before the waiver period expired.  Days later, Pacific Coast League directors confirmed that Lodigiani was a Seal and he finished the season in San Francisco.  In fact, the confusion over the timing of waiver claims and records was resolved by a rule change the following month – the record at the time of the waiver expiration would be used.

Lodigiani spent two seasons as a regular with the San Francisco Seals hitting over .300 each time, but eventually he would become a manager – first for Yakima in the Western International League and then for Ventura and Capital Cities in the California League.  Ultimately, what Lodigiani wanted to do was manage a big league team, but that shot never happened.  He was a coach in Kansas City in the early 1960s for his longtime friend Joe Gordon, but never a manager.  And, he was a scout for the Cleveland Indians and then the Chicago White Sox for number of years.  In 2006, after the White Sox won the World Series, the Sox gave their longtime scout a ring.

Still – he had a fine playing career.  In addition to playing more than 400 games in the major leagues, Lodigiani played more than 1500 games in the high minors – the vast majority of them in the Pacific Coast League.

Lodigiani’s scouting career bridged the gap between the days when it was possible to find future stars of the diamonds and preparing for the draft. “You still look for young talent. I beat the highways 30,000 miles every summer. But there is no such thing as an exclusive find because every other team is searching, too.”

He said the last shot he had at finding a gem was Gary Nolan, whom he discovered in Oroville, CA. “I was one year too late,” Lodi lamented. “I got friendly with the family. Everything was coming up roses. It was in 1965. The free agent draft was introduced. I was knocked out of the box. Cincinnati drafted Nolan.”

He appreciated the draft, though. “The draft gives the second division teams a chance to strengthen. Oakland is a case in point. When the A’s were down, they were able to draft Reggie Jackson and Rick Monday, “Lodigiani said. “In the old days, rich teams such as the Yankees and Red Sox would have outbid everyone for youngsters of their outstanding potential.”

During his lifetime of baseball scouting and coaching, he would return home to his wife, Marie Roberts, whom he married in December, 1950.  (Dario had previously married and divorced his first wife, Constance Matthews, whom he had met in high school.)  Their life included a lot of ballgames (as well as fishing, hunting, and golf), but no days with their own children.  After years living in his original family home, the Lodigiani’s eventually settled in Napa.  Asked by Jerome Holtzman if he (was) a wine connoisseur, Lodigiani laughed and said, “Oh, no, but once in a while I drink it.”