Charles Otto Schmutz was a rather tall spitballer who first garnered fame as a high school pitcher in Seattle and eventually found his way to the Brooklyn Robins. 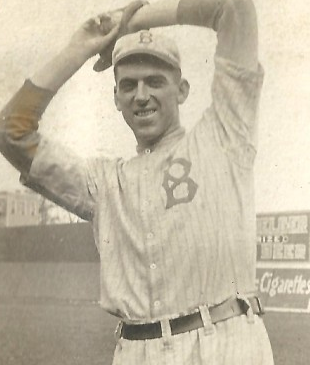 Born on 1 January 1891, Charlie Schmutz was born in San Diego but soon moved to the Seattle area with his father, Frank, and his stepmother, Alice.  Frank had a few different jobs, including car conductor and restaurant proprietor, while Alice took care of the family.  Charlie also had a kid brother, Ernest, who was a few years younger than he.  Charlie couldn’t hit, but boy could he throw.  He would join one of the more accomplished high school baseball teams you may ever read about.  His Seattle High team was so good that, with Schmutz on the mound, they actually beat the Seattle Giants of the Northwestern League in an exhibition game in 1907.  Soon after, that team went on a 31 game tour of the east.  First baseman Charlie Mullen was so impressive, that Charles Comiskey signed him to a contract with the White Sox during the tour.  A couple of other players earned nods with major and minor league teams.

Schmutz agreed to join Tacoma in the Northwestern League as soon as he graduated in 1909.  Listed at 6′ 1″, he was called “Big Charlie” in the local papers – not only was he tall for his time, but he carried at least 180 pounds on his frame (and was listed at 195 when he joined the Robins five years later).  By the time Schmutz had moved to Vancouver, he also acquired the nickname “King”.  Schmutz threw a hard fastball and, as a change of pace, a nasty spitball.

Amos Rusie, who convinced Brooklyn to sign Schmutz, said Charlie had greater speed than any pitcher he had ever seen in the minors.  It’s hard to say how hard he threw, though.  An article announcing his arrival in the big leagues said, “Schmutz has one of the most peculiar deliveries ever seen in the big show. He heaves much like a shot putter.”

Schmutz moved around some during his baseball career – after two and a half years with Tacoma, he was sent to Vancouver in July, 1912.  His season, covering both teams, resulted in a 13 – 17 record, but with just 57 walks in his 261 innings of work, and 94 strikeouts.  In 1913, he won far more often than he lost and, on Rusie’s recommendation, Charles Ebbets broke out the Brooklyn Robins’ checkbook and purchased Schmutz from Vancouver.

A story that made the wires said that Schmutz was in a car with former Giant Arthur Bues and Bues’ fiancee when they were pulled over for speeding. When they faced a judge, Schmutz offered to do all the talking, and stammered his way through a story about a couple trying to get married using nothing but baseball terms. The judge was
sufficiently amused at Schmutz’s effort and, instead of collecting the fine, offered to marry the couple instead.

After finishing the season in the Pacific Northwest, Schmutz returned a contract to Ebbets and joined Brooklyn for spring training, 1914.

Schmutz was good enough to make the team, but he was pretty much the last guy on the pitching staff.  He’d only see action when games were out of hand, or when the Robins were desperate to give a starter the day off.    He may have struggled with a shin injury, too – one article suggested that he may have had up to three different surgeries on his shin to address the problem.  This pattern continued into the 1915 season, when the lack of work affected his ability to consistently throw strikes.  As such, Schmutz became a nomad.  He was first optioned to Newark, then sold to Salt Lake City, and finally traded to Seattle.  That was just the 1915 season.

Charlie stayed in Seattle until 1916.  However, he held out at the beginning of the 1917 season and was eventually dealt back to Vancouver.  Before he could pitch, though, Schmutz registered for the U.S. Army and was soon serving his time with the 362nd Company in Europe.  After a two year hitch, he returned to Washington and married Brenda Jenkins in June, 1919.  They had a daughter, Nancy, but it wasn’t long before Brenda passed away, leaving Charlie a widow with a young daughter.  Already done playing baseball professionally, Schmutz was now occasionally playing semi-professional baseball while working as an electrician.

Picture used in the following article:

It belongs to the David Eskanazi collection…