Civil War veteran who played professionally in Philadelphia after the war but gets in your encyclopedia for playing six innings of one game for the Philadelphia Athletics in 1871. 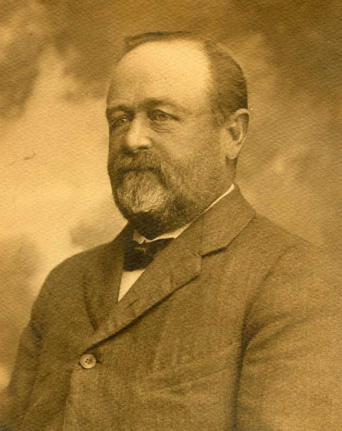 Alfred Tristram Metcalfe played eight games with the New York Mutuals of the National Association in 1875.  The photo shown here is cropped from one uploaded to Ancestry.com by a member (name not visible to me) and is also an image found on FindAGrave.com.

Metcalfe was the third child of Tristram and Elizabeth Mary Pearkes – a couple of English immigrants.  Tristram, as Alfred would do later, was a druggist.  Alfred married Anne Angevine and they had four children as well.  His record on Baseball-Reference.com shows a Brooklyn birthplace, but the 1860 US Census suggests the three children of Tristram and Elizabeth Metcalfe were born in Canada, something that is noted in son Ernest’s passport application.

“Alfred T. Metcalfe, 62, chief clerk of the Brooklyn Health Department, died on Wednesday at his summer cottage at Richie’s Point, Sheepshead Bay. He was in the drug business and active in Democratic politics prior to his appointment in the health office. He was a member of the Flatbush Democratic Club. His wife, three sons, and a daughter survive him.”

Other sources include the 1860, 1870, 1900 and 1910 US Census Records, the passport application of Ernest Metcalfe an English marriage record and a Virginia Marriage Record.

One of the first sport deaths to really shock me – he perished in a plane crash helping to take supplies to earthquake victims in Nicaragua.

He nearly died in a car wreck on the same day in 1954 when his car was nailed by a drunk driver. He had back issues the rest of his career.

YOU SHOULD HAVE BEEN THERE!!!

There were no games or events (beyond births, deaths, or transactions) worthy of note.

1966 The Braves send Eddie Mathews, Arnold Umbrach and (later) Sandy Alomar to the Astros for Dave Nicholson and Bob Bruce.

1974 The Yankees win the bidding war for Catfish Hunter.