Growing up in a small town near where the Mississippi River flows past the border separating Missouri and Arkansas, Orlin Collier was nervous about going to a large, major league city like Detroit.

“Jelly, never having been in a real city in his life, didn’t want to put his name on any paper that would make him go to Detroit,” said Hubby Walker, Collier’s teammate at the University of Mississippi.  “He and I were teammates and friends, and I guess Eddie (Goosetree) just decided to send me along to keep Jelly company.  At the time, you know, Jelly looked as if he were the makings of a great pitcher.  I was just a punk kid shortstop.”

Collier was also afraid of sleepwalking, something he did from time to time.  So, he told Hubby to sleep near the window and keep it shut tight so that he wouldn’t fall out of the upper level hotel room.

They went anyway and had a blast.  They spent ten days in Detroit, met Ty Cobb, who was managing the team, and got to work out with the Tigers while there.

Goosetree, the Tiger scout and a minor league manager, finally got three signatures on contracts – that of Collier, Hubby Walker, and Walker’s kid brother, Gerald.  Just not for a few years.

Born to Kentucky natives John Frederick and Minnie Mae (Edward) Collier, Orlin Edward Collier arrived on 17 February 1907.  By his high school years, the five Colliers moved to Paragould, Arkansas – Orlin had two sisters, Lorena and Doris.  A wonderful athlete and a bright kid, Orlin’s father passed away before he would see his son go to college.  At Ole Miss, Orlin lettered in baseball, football and track.

Collier earned the notice of scouts after tossing a no-hitter to beat Iowa.  During the summers, Collier and Hubby Walker would play semi-professional baseball in McComb.  Both Walkers also played professionally in low minor leagues under assumed names – none of the three wanted to lose the ability to play football for Ole Miss.  Well – two did that successfully.  Gerald was found out and just stayed in baseball rather than risk injury running the football in college.

Collier’s baseball odyssey began when he inked a contract pitching in Montgomery briefly before signing to pitch for Runt Marr and the Fort Smith Twins in 1928, which kind of served as a low level team in the Tigers chain.  Orlin wasn’t in the chain specifically – but the Tigers weren’t complaining that he was pitching with other possible future Tigers.  In two stops, Collier won five of seven decisions.

The following season, on recommendation from the Tiger staff, he signed to pitch at Beaumont in the Texas League.  He wasn’t really ready for this level, so he went back to Fort Smith and pitched a full season there, going 15 – 6 and pitching over 200 combined innings.

Orlin and Ruth Collier while in Fort Smith, Arkansas.

The Tigers convinced Collier to sign and moved him up a level to Evansville in the Three-Eye league.  It took two seasons for Collier to earn a promotion, following a solid 11 – 11 season with a 14 – 13 season where he logged 238 innings and had a 2.84 ERA.  His teammates there included Hank Greenberg, Pete Fox and a few others that eventually found their way to Detroit.

At the end of the 1931 season, the Tigers recalled a number of players and gave a couple of them chances to appear in games.  Orlin Collier got two starts, losing the first game to last place Boston in Fenway Park, 5 – 0.  Collier got through two innings cleanly but got swatted for seven hits in the next three innings and was pulled after five for a pinch hitter.  He got no decision in a second outing, giving up ten hits and seven runs to Cleveland, and was told he’d be invited to spring training in 1932.

However, Collier wasn’t going to be a Tiger very long.  Instead, the Tigers assembled a crazy good minor league team in Beaumont for 1932.  The Del Baker team featured Schoolboy Rowe, Collier, Greenberg (39 homers), Paul Easterling, Luke Hamlin, and Rip Sewell.  Rowe lead the team in wins (19 – 7) but five pitchers were in double digits, including Collier’s 16 – 9 mark.

After another spring training where Collier wasn’t really likely to make the squad (but led the squad in catching bass), Orlin was assigned to Toronto in the International League.  For the first time, Collier struggled, going just 9 – 17 and with an ERA over 5.00.  At this point, shoulder and arm problems started to bother Collier and it looked like he wouldn’t be a prospect anymore.

After the heights of the International League, Collier drifted through Williamsport, Montreal, Toledo, Milwaukee, and finally Birmingham.  Collier was 28 and no longer a prospect.

He landed back home in Paragould.  Now married to Ruth and soon to have a daughter, Collier first pitched semi-professional baseball before becoming a player/manager in the Northeast Arkansas League for his hometown Paragould.  There, he led the league with 177 strikeouts and seemed to find his stuff.  One time, he faced a kid who would be famous a decade later – Johnny Sain.  Collier graduated to Jackson in the Kitty League where he opened the season with 30 consecutive scoreless innings and won 15 of 24 decisions.  He had a game against Hopkinsville where he struck out 21 batters.

At this point, Collier’s career went back up.  He did, however, have some limits.  Even as a young pitcher, Collier didn’t always finish his starts.  At a time when it was desirable for pitchers to go the distance, Collier struggled after six innings.  The daily sports articles are littered with stories of his blowing leads in the sixth and seventh inning or later.  And, his arm didn’t come back on short rest.  He wasn’t going to make 40 starts in a season – Collier was among the first pitchers to need four days rest between starts.

Still – he could get the job done.  Signed to pitch for Nashville – and reunited with Hubby Walker – Collier was a dependable ace for the Nashville Volunteers in 1938 and 1939.  He’d go 26 – 12 over two seasons and pitch in key playoff games, even pitching Nashville into the Little World Series.  And six years after pitching his way out of the International League in Montreal, Collier was signed to pitch for the Baltimore Orioles. 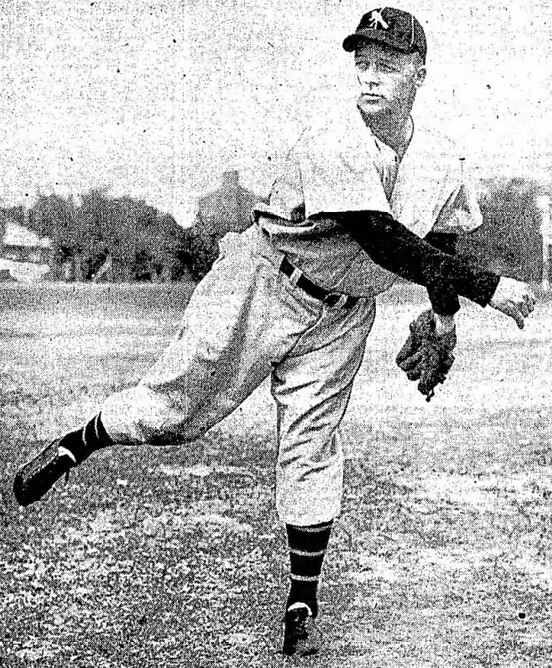 Collier wasn’t the team’s ace, but he took a regular turn for the better part of two seasons in Baltimore.  By the end of 1941, though, it was obvious his better days were behind him.  Sold to Knoxville for 1942, even Collier knew he was done.  Stories tell of Collier walking off the mound before manager Bert Niehoff got out of the dugout because he knew he was going to be pulled.  He went 1 – 5 in nine outings, getting shelled more often than not.  It was time for Collier to go home.  He won 155 games in the minors, losing 135 (plus one in the big leagues).  It was a good career.

Collier home in Paragould in a family photo taken in about 1943.

Collier opened a dry cleaning store in Paragould.  His happy retirement was short lived, though.  In 1944, his wife Ruth needed surgery and they traveled together to Memphis.  Stressed out beyond what his body could handle, Collier had a massive heart attack and died on 09 September 1944.  He was 37.  Ruth didn’t survive surgery either – she died a few days later.  Their daughter, Doris Anna was sent to live in Atlanta with one of Collier’s sisters.  Doris passed away in 2007 in South Florida.

Thanks to family members who uploaded images of Orlin to Ancestry.com.