Grover Gilmore, born 1 November 1888, was a Chicago native who got a shot to play in Kansas City when the Federal League got rolling, but never appeared in a National League or American League game.  In his two seasons with the Packers, he hit .286 and stole more than 40 bases – he could have been a marginal fourth outfielder somewhere when the Federal League closed shop.  Instead, Gilmore returned to the minors and eventually took a job as a traveling salesman. 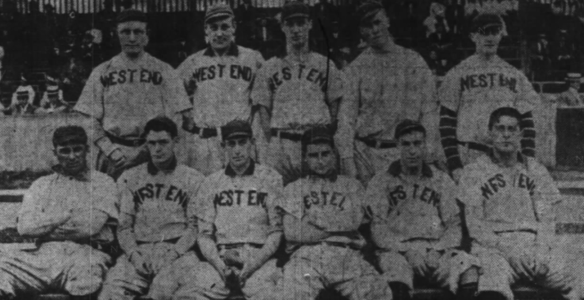 After playing for a Chicago semipro team called the West Ends and sponsored by Bernard J. Coans, Gilmore was initially signed by the White Sox in 1910 and farmed out to the Denver Grizzlies in the Western League for the last month of the season.  After a solid spring training, the Sox again sent him for a full season of tutoring in Denver where he hit .299 with a fair mix of doubles, triples and homers for the Western League champs.  At the end of the 1911 season, the Sox recalled Gilmore, who was being treated as a fine young prospect with good hitting and bunting skills for a kid who could play most any position on the field – though usually in the outfield. And, he was fast…  Gilmore tied a record by running from home to first in 3-1/5 seconds during field day events before the Western League All Star Game in Lincoln.  And, he finished the season with 54 stolen bases.

Despite the hype, the Sox never put Gilmore in a game.

Gilmore at spring training with the White Sox in 1911.

Instead of starting with the Sox in 1912, Gilmore was likely on his way to spending another season in the minors – either in Denver or Des Moines.  Somehow he was farmed to former ChiSox star Frank Isbell, who was managing in Des Moines.  However, Gilmore balked at the low salary, so he held out briefly before being sold to Buffalo in the International League.  At first, he was a fourth outfielder and pinch hitter.  Then, he got to start some, but he had a rough patch, including an 0 – 8 in a 19 inning game.  At that point, he was sold to the last place San Francisco Seals of the PCL.  That lasted about four weeks – ending with perhaps the worst day he could imagine.

On the train to the morning game, he was robbed of a diamond pin, gold watch, a fob, and $40 in cash – and between the morning and afternoon games, he was told by manager Cal Ewing he was being released back to Buffalo.  Gilmore said of the robbery that he could handle losing most of the stuff – but he really wanted the fob back since it was presented to him by President William Howard Taft as part of a celebration for winning the Western League pennant.  The story made national news wires – and the pickpocket must have gotten a change of heart.  Keeping the cash and the diamond pin, the fob and watch were shipped back to Gilmore in an unmarked package and then forwarded to Gilmore’s new Buffalo residence.

Buffalo had little use for him, though, so Gilmore was kindly allowed to return to Denver to finish the season. When playing, the speedy Gilmore improved his hitting – batting .319 in 1912 and moving up to .335 with 41 extra base hits and 30 stolen bases in 1913.  The 1913 season was also an odd one – the Denver franchise reorganized – the higher priced players were released and Gilmore returned briefly to Chicago to play semi-pro baseball until he could get a contract he liked.

Most winters, Gilmore returned to Chicago and worked as a mail carrier in the off-season.  He would take a quick break in the middle of the season and return home to keep his government service rating.  However, the rules changed in 1914 – and Gilmore instead signed a multiple year deal with the newly formed Federal League, playing center field with the Kansas City Packers. It was enough of a raise that he didn’t miss his postal work. 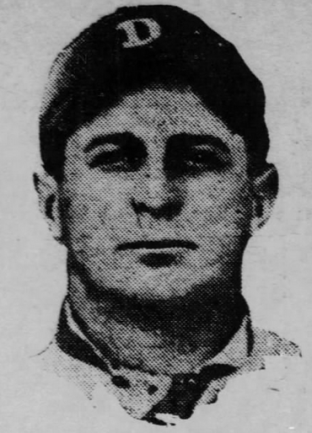 The 1914 season went rather smoothly, but the 1915 season started out with the thought that Kansas City would be moved to Newark.  By early April, the team hadn’t moved and was going to be fighting with the American Association’s Kansas City Blues for the attention of local baseball fans.  The KawFeds died – Gilmore’s contract went into limbo, and for 1916, Gilmore would be looking for work.

After signing with St. Paul and he soon headed back to Sioux City of the Western League.  He quit baseball to be a traveling salesman but would play for teams as needed on holidays or on vacation.  Returning home after one such excursion, he caught Typhoid Fever in the fall of 1919 and it quickly took his life that November.  He had just turned 31.