Butka was the name that caught my eye today – a backup first baseman with the Washington Senators during the war years.

Edward Luke Butka was born in Canonsburg, PA on January 7, 1916 to Julius and Mehalena (Tumicki) Butka, two Polish immigrants who arrived in this country between 1890 and 1901.  Ed was the fifth of seven children born to the tin mill laborer and his wife.  Butka’s school days ended after the eighth grade and, like his father, he took a job at the tin mill.  Nights and weekends he either played baseball or bowling, depending on the season. 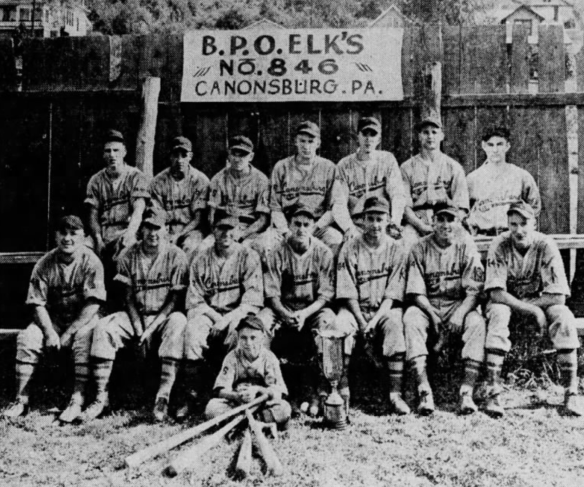 He played on some of the better area baseball teams, including the Carnegie Pirates and the Canonsburg Elks (see photo above – Ed’s in the top row, third from the right), until 1940 when he is listed as having played D level ball for Newport in the Appalachian League at the age of 24.  In fact, one of his semipro Elk’s teammates was Andy Seminick (top row, second from the right), who would play with the Phillies in the late 1940s and 1950s.  Butka was an exceptional amateur ball player and eventually he got interest from Pittsburgh and Washington.  Washington’s Joe Cambria signed him, and then from 1940 to 1943, Butka played for Newport, Salisbury, Orlando, Utica, and Springfield learning his trade.  In his second season at Springfield, the Senator scouts took a greater interest in Butka, as they were hurting for help at first base – the war having taken a lot of talent away from the game.

For some reason (one article suggested it was a blown ear drum), Butka was listed as 4F by his draft board – which made him appealing to Senators management.  He got three games with the Senators in 1944, getting three hits in nine at bats, but was sent back to Buffalo anyway.  He was basically optioned – meaning he could get recalled at any time by the Senators – and every now and then, when someone got hurt, Butka would appear in a few games.

The only game in which Butka is specifically mentioned by The Sporting News, he actually didn’t play.  Browns pitcher Nels Potter got frustrated when he gave up a seventh inning rally and took it out on George Case.  Case didn’t take kindly to getting plunked, so he yelled out to Potter – who met Case halfway to first base.  At that point, Case landed a quality right hand and both benches cleared.  Case and Potter were both ejected, as was our man Ed Butka – who was tossed for indiscriminately joining into the fray, suggesting that the best contact Butka made in 1945 was with a Browns player.  Case, for what it’s worth, injured his shoulder and missed a week of games. (Povich, Shirly. “Griff Spending to Duck Cellar”, TSN, 8/31/1944 – pg. 6.)

As a player, Butka was a contact hitter with a good eye, but he didn’t have much power.  Baseball-Reference.com doesn’t list a season where he had more than seven homers and his batting average ranged from the mid .250s to the low .300s, with a decent enough eye at the plate – usually more walks than strikeouts.  The recorded nickname listed for Ed is “Babe”, but when he filled out a questionnaire for MLB, he listed his nickname as “Jackson.”  He was a big dude – 6′ 3″, but that belied his penchant for hitting line drives rather than fly balls. 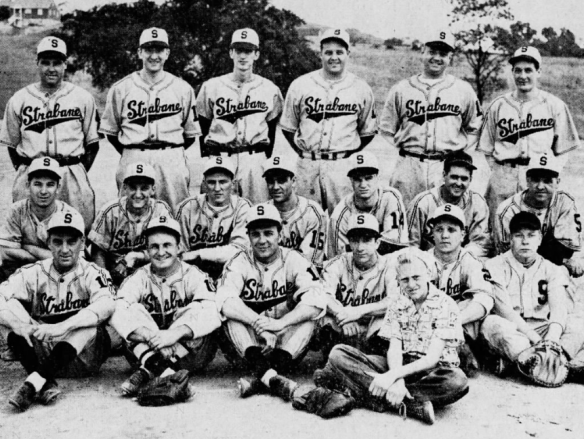 This image was taken from a Canonsburg newspaper, Ed Butka played for the Strabane Tomsic Brothers semi-pro team in 1949.  Ed is in the top row, second from the left.

At this point, Butka came home.  Returning to Canonsburg, he became a dispatcher for the borough, played semi-pro baseball locally, and lived the suburban life.  He had married Helen Mae Meeks after the 1944 season – now they came home and had five kids.  Evenings and weekends, Butka coached community baseball teams, or worked the garden and played golf.  In 2001, he was inducted into the Washington/Greene County Chapter of the Pennsylvania Hall of Fame.  Less than two months after the death of his wife, Helen, Butka met his demise on April 21, 2005 and was laid to rest in the grounds of his hometown.