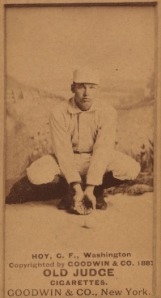 In days when we were less worried about things like political correctness and more about the character of the person instead, the nicknames doled out to players would frequently carry an unnecessary meanness.  And yet the names were precise and memorable.

William “Dummy” Hoy is probably the meanest name – worse than Rube Waddell or Fats Fothergill ever got – handed to Hoy because he was deaf and dumb, meaning he couldn’t speak.  What God gave him, though, was class and intelligence and skill.   Born during the Civil War (May 23, 1862), he went to a “trade college” and was going to be a cobbler when scouts saw him playing ball with kids.  He got a job playing for Oshkosh, Wisconsin and within two years he was in the National League.

Hoy played forever, starting in the National League in the 1880s, swinging a year in the Players League (1890), getting time in the American Association, playing in the American League in 1901, and finishing his career by plating the first run in the newly expanded Pacific Coast League.  To tell Hoy’s story requires a book – and apparently someone is working on it (I should have started it years ago, to be honest).  If you want a good place to start, try www.dummyhoy.com – a site dedicated to his memory, including trying to get Hoy into the Hall of Fame.  There’s a pretty good article about Hoy written when Hoy was still alive (he made it to 99, passing on December 15, 1961) that you can find in an old Baseball Digest that Google has now digitized – and it’s worth a read.

What we know is that Hoy’s inability to hear umpire calls contributed to the signals used by umpires to call pitches, denote safe or out calls, and more.  Tommy Leach said that if you played in the outfield with Hoy, you couldn’t call him off so you did what you could to get to the ball unless you heard Hoy’s barely audible squeak.

I wish I knew more – but there are a few things you can figure out by looking at his record.  He played in five different leagues and played on a number of teams.  He hit for a decent average and stole a ton of bases.  He had a good throwing arm and still holds the record for throwing out three runners at the plate in the same game.  He was well-traveled and apparently well-liked – and yet he was constantly moving from team to team to team.  He was aggressive and intelligent, he was honorable, but teams found him expendable – probably because of his physical limitations.  Owners and managers might not have felt too comfortable around him – despite the fact that he seemed to be productive.

Hoy played with Rube Waddell in 1899 while in Louisville.  There was a day in spring training when the hotel they were staying in caught fire and everyone got involved with putting it out.  When players went to check on Hoy, Hoy and his wife (I think she was also deaf) had already packed and gotten out – they “felt” the commotion and then saw it, which prompted their hasty exit.  Another story that circulated about that spring was a stretched story saying Rube’s first night in town included waking everyone up in their hotel rooms to introduce himself – except Hoy, who didn’t answer the door.  (It never happened – it was a story modified over the years by Honus Wagner.)  There have to be a million stories about him – as an athlete and as an amazing person – so I want to know more.  (Here’s one I found.)

You know what I want to know?  Why aren’t there others like him playing baseball?  I really think that 100 years ago, when there were fewer avenues for people and EVERYBODY had to mainstream, if you were different you had no choice but to try and fit in.  We might not have been as nice in terms of name calling, but if you made it – you made it.  Nowadays, we try to compartmentalize everyone and everything, and in the process of doing that, the mainstream is so much smaller – and EVERYONE is treated differently.  People who are different never get a chance to see what is similar about each other because we’re too busy celebrating differences – and we’ve eliminated opportunities to bring people together for common causes.

If a book doesn’t come out about him soon, I know what my next project should be.

Happy Birthday, William Hoy.  In heaven, you can hear the applause.