“This message written on the unopened envelope containing a contract for Leonard B. Hollywood, a promising infielder, was the first information Frank C. Navin, president of the Detroit Americans, received concerning the death of the Tiger recruit on the battlefields of France.

“Hollywood was purchased from the San Francisco club in the fall of 1917 and Manager Jennings of the Tigers was counting on giving him a trial this spring.”

Leonard Bazley Hollywood was the second of four children born to Charles B. and Hattie Zelda (Lee) Hollywood, arriving on Christmas Day, 1895 in Fruitvale, California.  Charles worked with a manufacturer and spent a long time as a sales manager for the California Packing corporation.  His mother got to deal with raising a daughter and three sons, at least two of which were excellent athletes.  Before long, the family moved to Alameda, CA, which would be Charles’ home until he died in 1948.

Leonard, frequently shortened to Len, was a star on the baseball diamond – he could pitch and play any position in the field.  His younger brother, Phelps, was on the same baseball and rugby teams in high school – they actually graduated from elementary school and high school in the same years despite the fact that Phelps was about 16 months younger than Len.  When not on the high school teams, they both played on amateur and semi-professional teams such as Lincoln Park in Alameda or the Colusa city team.

Len also had a natural instinct for action.  William Elwitz was swimming in San Leandro Bay when he got confused and swam far from where he started.  He spent what seemed like hours trying to find his way back and when he got to a shallower area where he could walk he set his feet down.  Unfortunately, his feet got stuck in the muddy bottom and he couldn’t get out.  And, the tide was coming in – waves were splashing into his face.  Leonard, just sixteen years old, heard his screams and took action.

“Leonard Hollywood, son of C. B. Hollywood, 1519 Fernside avenue, went to the water’s edge to investigate and put out in a skiff. As he reached Elwitz the latter was on the verge of drowning.

“Young Hollywood tied a rope under Elwitz’s arms and after a struggle succeeded in freeing him from the mud. Elwitz was too exhausted to climb into the boat and Hollywood rowed slowly ashore, dragging the all but unconscious man after him.” 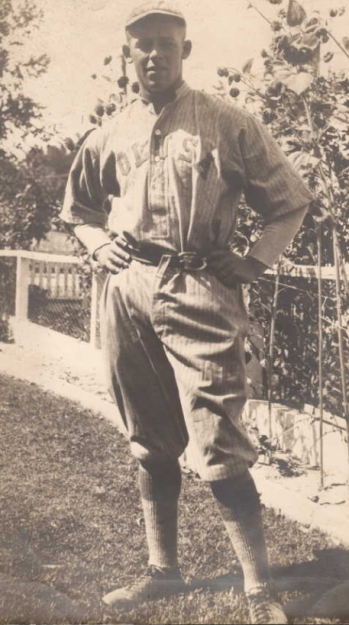 That thirst for action and adventure applied to the way Hollywood played baseball.   You couldn’t miss him on the field. It was while playing the infield for Colusa that Leonard Hollywood caught the attention of scouts for the San Francisco Seals, the Philadelphia Athletics, and the Detroit Tigers.  Harry Wolverton, manager of the Seals, convinced Tiger manager Hughie Jennings to sign Hollywood in 1916 but loan him to the Seals for seasoning.  Hollywood appeared briefly in four games for San Francisco, then returned in 1917 for spring training with the Seals.

“The scintillating star of the combat was Len Hollywood, the little Alameda boy who is getting his baptism in professional ball. In three trips to the plate he ripped off three hits, stole a base and scored a run, and handled his ten chances in the field with neatness and dispatch.”

Hollywood was so good in spring training, he earned a spot as the Seals’ utility infielder, taking away a position from a young Lefty O’Doul.  He was tabbed as a future star, but he didn’t crack the starting lineup on a daily basis.  One thing he did crack, however, was his knee.  Len slid hard into a base in early June and would miss much of the next two months when x-rays showed a fracture.

Weeks before his injury, Hollywood – looking for action, no doubt – registered with the United States Army as the country prepared to enter World War I.  According to stories told years later, the draft board initially rejected an injured Hollywood, so he enlisted instead.  In fact, after making a few pinch hitting appearances in August, Hollywood stopped playing so he could heal and be ready to join the army.   In October, Hollywood was called to Fort Lewis for training, and within weeks had boarded a ship for France.

Meanwhile, the Tigers notified the Seals by putting in a recall request for Hollywood’s services.  When he returned from Europe, the Tigers would add him to their roster.  And, he’d be a married man.  Before leaving, he asked Flossie Henderson to marry him – they would get hitched after his military hitch.  Another person eager to serve was his brother, Phelps, who joined the navy and served as a radio operator on the USS Drecht.

Leonard Hollywood was first assigned to Company H 161, 41st Division before eventually being moved to Company A, 23rd Infantry.  Over time, he rose to the rank of Corporal.  There were reports that Hollywood had been seriously injured racing among the trenches.  One story says that he was injured in battle at Chateau Thierry and cited for bravery, but he returned to the front and continued fighting.  In late October, he wrote his parents and a few weeks later, the war came to an end on November 11th.  People looked forward to seeing the Hollywood boys when they finally could return home.

Only, he never returned home.  His unit was near Sedan in the Ardennes, a few miles from the Belgium border, when fighting continued.

“At Lincoln Park in Alameda and on the baseball lots of the Pacific Coast and Trolley leagues, fans saw Leonard Hollywood, better known to them as plain ‘Len,’ step in front of some fast drives and stop them with grace and precision. But no more will the lad step in front of fast ones, for Somewhere Overthere {SIC} he got in front of one too fast for him to handle, and was carried across the ‘great highway.'”

In early January, Hattie and Charles received a telegram from Adjutant General Harris of the War Department.  Their son had been killed just eight days before the war would end.  Leonard Bazley Hollywood was 22 years old.

A few weeks later, the family received an envelope from the Tigers containing his contract for the 1919 season. Charles or Hattie didn’t bother to open it.  Instead, they wrote on the envelope “Killed in action, November 03, 1918.” and returned the envelope to the sender.

After the war ended, Hollywood’s body would be removed from his grave in the Sedan American Cemetery near Letanne, Ardennes and loaded onto the USS Somme.  He was then brought to Arlington National Cemetery, where he now rests near his fellow soldiers.  Back home, the local Veterans of Foreign Wars Post 939 in Alameda named the post after Leonard B. Hollywood.  That post would remain active until it merged with Post 9119 in 1981.  Post 9119 is named after Edgar Stanton Rosenstock, so Hollywood’s name is no longer present.

Near the end of World War II, entertainment writer E. V. Durling had a conversation with someone from Detroit about major league players killed during the first World War.  Durling always thought that Eddie Grant was the only major leaguer who died in combat (others died of illnesses, accidents, and one from injuries).  The person from Detroit remembered Hollywood.  So, Durling, who worked the west coast as an entertainment writer for New York papers when Leonard was an active player, must have reached out to his friends to find out if this Hollywood story was true.  And it was almost true – Len was owned by the Tigers but never played a game for them.  In his nationally syndicated column, Durling argued that Hollywood, like Grant, deserved a plaque in his home stadium.  He reached out to Seals owner Charley Graham, who thought it was a great idea – but Graham added that the second World War was still being fought and it might make sense to include the four Seals who lost their life in the current war.

Graham’s control of the team ended soon after, though, and a memorial to Hollywood and the other Seals players who gave their lives to save the world never came about.

“Corporal Leonard B. Hollywood of Alameda Honored by Comrades”, Oakland Tribune, 21 May 1922, Page 4A. (And photo in suit)